I’ve had an annual leave day so a chance to take a few photos of some of the rushed paint jobs off my desk this week. My paint desk is set up in the “dining room”. If I pass it and feel the urge, I sit down and put a colour or two on something. I rarely get the to sit and paint for hours anymore. Probably my age; shaky hands, dodgy eyesite etc.

I’ve flitted between a few things this week, mostly for Beyond the Gates of Antares, but a few things for Kings of War (or KoW Vanguard). I suppose it’s quite a lot for a week’s worth of painting. I’ll put the KoW terrain up next post.

Drones and a couple of new troopers. 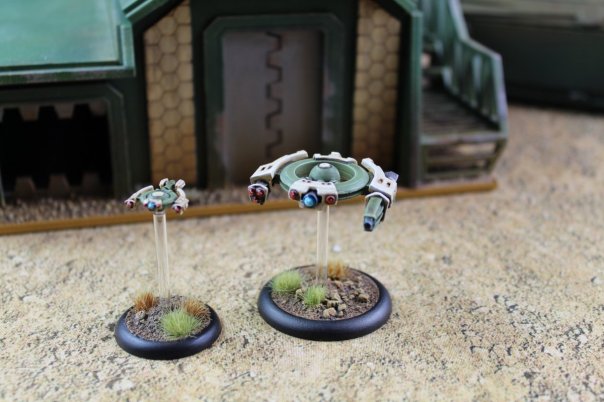 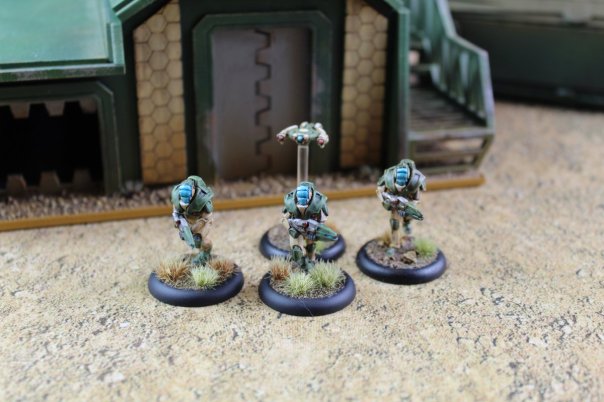 I had a full unit of 6 troops and a spotter drone painted. I think I must have dropped a model on the way to the camera and missed a mag-gun figure off the photo. (I found it on the paint desk later) 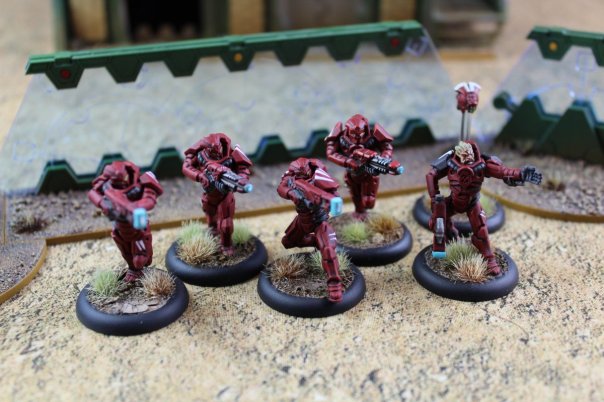 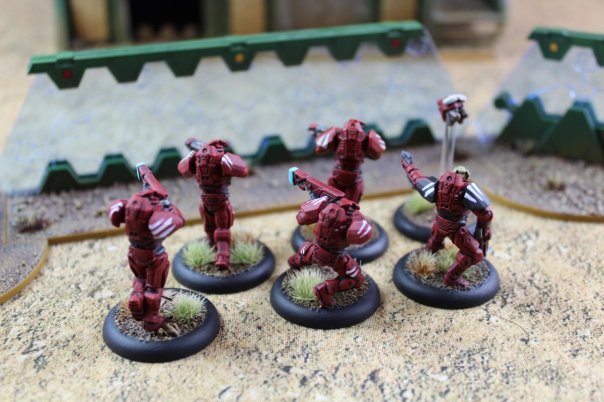 Warlord games had sprues of these on sale in the last sprue sale they did. Each sprue had a spotter drone and 8 troops with a variety of equipment on them. Not bad for £2 per sprue. I may or may not have a few awaiting building to start a new Freeborn army. I’ve about finished a squad of 8, but also picked up a few other pieces from eBay – including the Mag cannon I’ve painted – the crew are half done on the paint table. I also got a squad of Vardanari so I could convert the leader into a pistol wielder for a command squad. 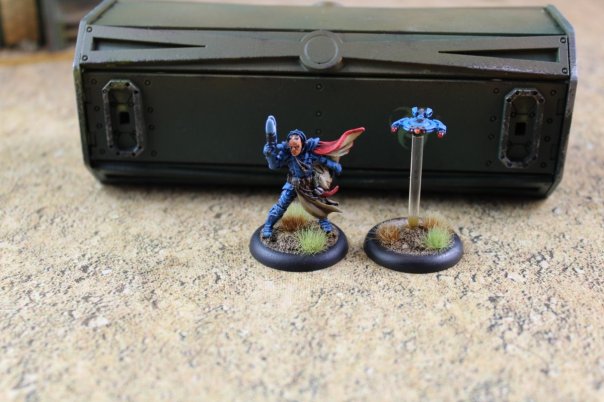 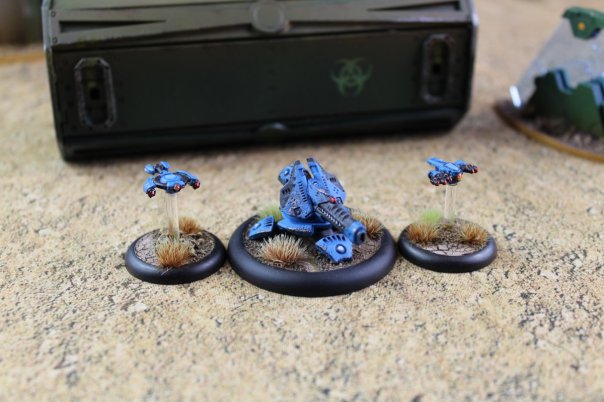 There’s a piece of ‘cheap’ mdf terrain  – I think it was a TTcombat piece. It turned out nice, but doesn’t provide much cover. It will probably get used as an objective of some kind.

I feel I’ve flitted between paint jobs this week, but it helps keep me going. If I sit down to do one type of painting, I lose interest – jumping between colour schemes and projects keeps it mixed up enough to get more done.

I can’t believe how long it’s been since I got round to posting on here. Over a year. Ouch.

It’s been a long year. A total change of career – quitting teaching after 23 years – and a  severe reduction in wages. I haven’t forgotten about wargaming or painting. I’ve still been painting a few things, and building lots of miniatures. I wrote a backlog of all the things I need to photo/blog and the list went on and on…

So, I thought I’d kick this year’s first post off with a rant.

Once upon a time, I had a large army of Orcs and Goblins for Warhammer Fantasy. I started painting them up as carefully (but speedily) as I could using a combo of GW Goblin Green paint and GW’s Green Ink. About a quarter of the way into painting them, GW discontinued the Green Ink. The replacement washes were nothing like the same colour, so my army went on the back burner. Damn them.

I’d also got used to painting with a colour called Mechrite Red. That also got discontinued by GW and replaced with the “equivalent” colour Mephiston Red. Well, I’m sure you can tell from the pic below, they are far from the same… (pic not mine)

The new Red is actually really good – In fact I was using the Mephiston Red Spray paint GW made to base paint my Gates of Antares Algoryn forces. That is, until – you guessed it – GW discontinued the spray.

You’d think I’d have learnt my lesson, but GW released a texture paint called Agrellan Earth. It’s basically a crackle paint that you paste on quite thick and it dries like dried earth. It’s pretty good stuff. I’d started using it on a lot of my Antares game bases. Not for the entire base, just some on a few bases to show the dried out land the models were stood on.

Anyway, my small pot of Agrellan Earth is about used up. So I went to GW’s website to order some more. There were 2 options, Agrellan Earth and Agrellan Badlands. Apparently the Badlands version dries in larger patches. Anyway, the good news for me was that they came in the new larger pots. Great. A tub of the Agrellan Earth will last me ages. I should have known.

Here’s the old pot on the left, and the new one on the right. They are most definately not the same colour. 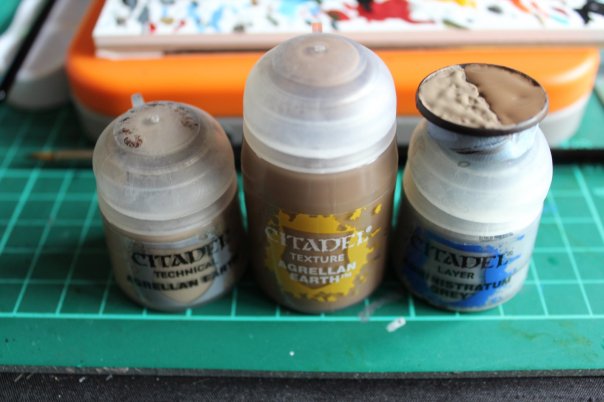 As you can see, a massive colour difference. So, I decided to give them a few hours to dry, to see the crackle effect. I hoped that maybe drying out gave similar colours.

So much for adding some quick cool effects to the bases of my Antares armies. Yet again, Games Workshop changing colours, or discontinuing colours has wrecked my painting mid-way through an army.

From now on, I’ll be sticking with Army Painter and Vallejo all the way. A great deal of my paint collection is by them, and a dripper bottle is far better than the awful pots GW make – now those pots alone would make a whole rant post.

I wrote an email to GW showing the colour difference. By the time I saw the email reply from them, they’d already sent another large pot free of charge through the post. Although I have my qualms with GW, their customer service is still really good.

Mixing the Saffron with the new GW Agrellan Earth in a roughly 50/50 batch gave a very similar colour to the old Agrellan Earth. As both paints are crackle paints, the mix didn’t  ‘water down’ the crackling effect. The tubs are also ‘squirty/dripper’ types making it way easier to use than the GW pot.

Problem solved – and with enough crackle paint to mix do multiple armies now. 🙂