I finally got round to buying my first DSLR camera. Nothing expensive as it’ll only get used for miniatures (and probably ‘borrowed’ by my lad for his youtube vlogs). I’ve never had anything other than cheap point and click camera or mobile phones before, so I have a massive learning curve ahead. I know I need a better lighting set up, but I think I’ve about mastered getting the minis in better focus, so both the front and back of the mini are in focus at the same time – that was the main hope for the new camera. If you’re interested it’s a Canon EOS 1300D. A small 6″ tripod with a ball socket on top and settings of 0″5 shutter, ISO 100, f/22 works a treat.

The only problem with getting a new shiney camera, is that it takes pictures that really do show up the fact that I’m an old half-blind sausage-fingered shakey-handed painter. The advantage of bad eyesight though is that the minis look fine on the table top.

As Wayne  and Garth would say… “Extreme Close-Up”. It’s good to finally be able to take a photo where the front and back of the photo (in this case the 2 wing fins) are both in focus at the same time.

Here’s the Silent Death Sunrunners I’ve been working on. All looking like they’ve had a few battles too many. If I ever get my Antares models all finished, these can count as the Boromites in that distinct yellow colour.

Single Thunder Bird front and back first of all…

Then the 2 I’ve done together.

The force so far – I have a Catastrophe, 2 Havoks and 2 Avengers coming from the SD webstore to add to these soon. 🙂

And these are the type of things I’m using for satellites in Silent Death. They’re the smaller parts of the Dropfleet Commander modular space station. They’re really for a much smaller scale, but as satellites, I prefer them to the single SD model.
On the Left, an Atlatl (missile launcher on it) and on the right, a Taurus with torp launcher and a meld laser. Sunrunner flying between them for scale. 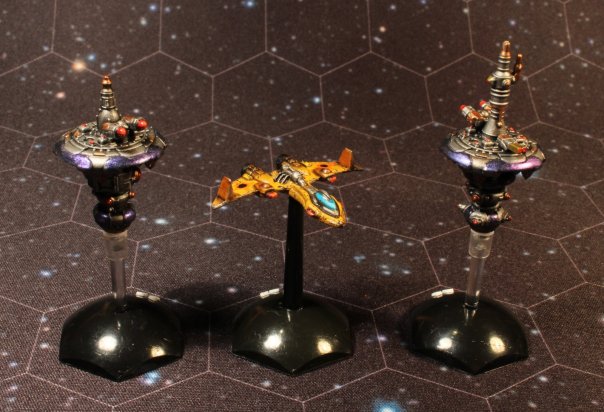 On the paint table next are a few additions for my Algoryn force. Back to painting red 🙂

And when I can afford it, something better than 2 old desktop lamps with standard bright bulbs for lighting.

Well, although I was only going to play/paint two main games this year. I’ve extended that (in a way).
I was searching for a couple of cheap plastic ships to use as counters for our Traveller CCG game. I came across some old Silent Death ships on eBay and got those. It was actually a plastic sprue of 12 ships for a few pounds. Anyway, I decided to have a look at the rules – and found a copy of the Silent Death The Next Millenium box set on eBay for twenty five pounds. 48 Ships, all the missile counters etc. Not bad for a game that came out in the 90’s – everything still in great condition and all models still on sprues. Having read through the rules and had a trial game, it seems to be a far more fun game than X-Wing for us.
Also, having read through the Gates of Antares first campaign, there was a lot of ship battles at the start. So we decided that we can alternate ship battles and Gates of Antares battles and link them into campaigns. The ships can fight over a planet then the forces can battle it out. Or any combination or battle scenario we fancied.

So, I grouped the ship types into ones I thought might look like the Antares factions, and tried to keep them fairly balanced. We now play Silent Death, with forces set up to be Antares factions.
Here’s what I’ve painted this Easter.

As usual, apologies as I only have an old (really old) camera and a couple of table lights, so apologies again for the poor photos, and the thing I notice the most, the poor colour representation – I sooooo need a decent set up.

Anyway, To link in with my games of ‘Beyond the Gates of Antares’, firstly are the Algoryn. In my SD Universe, these will be my Espan.

Still linking in with my games of ‘Beyond the Gates of Antares’, these are the Ghar
In my SD Universe, these will be House Colos

These are the Concord. In my SD Universe, these will be the Kashmere Commonwealth.

For ‘Beyond the Gates of Antares’, these are the Isorian. In my SD Universe, these will be the Unkulunkulu.

I decided that although the Sunrunners were Mercenaries, and were also busy fighting the grubs, their ships were fighting a lot and were going to be a little beaten up looking. This was my first trial of the paint job. I tried a free hand black circle with the 4 strokes of sunlight coming out, but the orange barely shows on the yellow in the photos.

If and when I buy any more Antares armies, I’ll use these with the yellow scheme as the Borites.

Also below are some of the Asteroids I’ve been painting. The first batch were cast from a white plaster for X-Wing by a company I found selling on eBay. Although they’ve painted up nicely, they are very heavy.

The second, less impressive batch, I made from some 2 different sizes of polystyrene craft balls, sprayed with Black car paint (to purposefully melt them). I had made some in the past from chunks of polystyrene but I based these onto some X-Wing templates. These ones turned out less well as the ‘hexes’ of polystyrene the balls were made of were really large and still visibile. The advantage, they weight virtually nothing.

Finally, I decided to make a ‘Black Hole’. I used a gloss black paint, then a couple of layers of the two tone metallic paints from Green Stuff world. As you turn it, the purple shines to blue, but overall, it has a black look. It’ll make some interesting games.

Now, I need to go and photograph the Antares models I’ve painted up and add them to the blog.