It’s been a pretty lousy year overall. Serious illness and loss of a job puts a block on all sorts of things. I’ve also bought about 4 times more models than I’ve managed to paint. However, the year’s ended pretty well. Illness under control and improving, a new job at a fantastic place, even if it is only till next summer.

How’s the hobbying and painting going then… well, I’m going to make a New Years’ Resolution this year. Although I’m still going to try to play the massive assortment of games I have, I’ll stick to a painting focus on just 2 games.

Beyond the Gates of Antares. Although I’ve always wanted to give this a try – after all, my main opponent – my wife only really enjoys Bolt Action. I’d overlooked Antares for too long. The rules are basically Bolt Action, but with stats added in for differences in aliens. The models are now coming out in plastic for the main troops as well and the larger models are in well crafted resin with a few metal pieces. In the Warlord sale, along with a voucher, I started the set off with:

With a few more additions since, I’ve taken it to having 3 average sized 1500 point armies. Ghar, Algoryn and Concord. As there’s three of us in the house, that means we can choose an army each to play with.

Kings of War. I bought enough Ogres to field a 2000 point army. Why Ogres? Well, I’ve always loved the pics in the KoW rulebook of the red ogres with the white paint on their faces – kind of LotR’y. Also, 3/6 models per unit rather than 10/20 should speed up the painting process to get an entire army completed. I tried one out, and although the mobile photo isn’t brill, it came out fairly well – certainly at arm’s length with my dodgy eyesight. Ogres are also Neutral. So I can align these with the few Lizardmen or painted Dwarves I have to make a large enough army to take on the Undead or Orc/Goblin alliance. Although there’s a general hatred of Restic on the internet, these models were a breeze to clean up and put together. 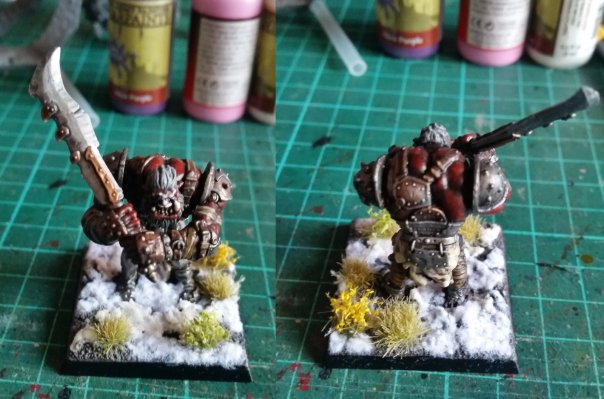 I’m certainly not going to forget the other games I play, which is a rather long list now.  There’s some fantastic stuff coming out for Maelstrom’s Edge. I’ve never seen such well made resin models as well as the new plastic Broken they’ve made. Mantic has just released most of the vehicles for Warpath. I’ve even (shock) bought some new GW stuff – 40k Death Guard and Dark Angel Primaris models, along with the new version of Necromunda. All built to play, but unpainted. Dracula’s America is also a great game to play with fun rules. I’ve got my Tombstone kickstarter arriving any week now, so that will also get some action. Lots of models to paint, even if it is only the odd one to break up the Ogres or Antares painting.

Hope you all have a great New Year!